Despite the Stigmas that surround this beautiful flower, Somniferum Poppies are perfectly Legal for Gardeners LIKE US, to grow for theirSeeds, Culinary Uses, and/orAesthetics (according to Reliable sources such as Wikipedia.org and WSU.edu)

Allow me to first make it clear that we are GARDENERS, with a Passion for growing Beautiful Flowers. The purpose of thie Article is to keep Gardeners Properly Informed about their Rights and Responsibilities as Growers.

(we do NOT offer, or claim to offer, Legal Advice of any kind, in ANY WAY)

Our hope is to provide some insight, as to why any confusion exists regarding the Papaver somniferum Species.

A VERY COMMON Question I come across:

Q: “What kind of Poppies Produce or Make Opium”?

A:ALL Papaver somniferum Poppies (AKA: BreadSeed Poppy, P. Paeoniflorum) & it’s Parent; P. Setigerum, Contain Morphine, Codeine, Thebaine, and other Alkaloids that Pharmaceuticals are made from, and are the same Poppies the Afghans use to create the World’s worst poison of all; Heroin

Which leads to the next Question;

“Are they Legal to Grow in the USA?”

NO!! It’s NOT Legal to Grow Opium Poppiesfor the sake of Harvesting the ‘Opium’or via ‘Poppy Straw’ method.

(The term ‘Poppy Straw’ originates from a mechanized method of processing the whole poppy plant, rather than the Lancing of their Individual Pods, thus decreasing the high cost of human labor)

BUT We’re just Gardeners! Should we worry? I’M CONFUSED.

Why do you think we took the time to create this Post?People have a Tendency to Confuse “OPIUM”, with the “Somniferum Poppy“. But to simplify, think of “Opium” as someone’s Blood. Perhaps the Blood of a Beautiful Person. Now, if the Poppy Plant was their Body, there’d be nothing wrong with appreciating their “outer Beauty“, right? Exactly!! I shouldn’t need to explain any further, since I’d rather not go into the bloody details, but let’s just agree that no matter how you look at it, accessing their “inner Beauty“ would NOT be legal (nor nice), and would probably involve Handcuffs, a Strip Search, 3 Hots, a Cot, and lot’s of Cold Concrete (and the possibility of Bubba discovering YOUR‘Inner Beauty‘)

So, the Info that one may find while Researching Poppy Laws, may sometimes have to do with their Intent.

But feel free to read the Answers for yourself via @ the Reputable Sources below:

The University of Washington’sVegetable Research and Extension Center says…

“It is Legal to grow Papaver somniferum in the United States for garden and seed production purposes; it is only illegalto manufacture opium from the poppies.”

According to the Wikipedia.org, the U.S. Law states:

“…the opium poppy is legal for culinary or esthetic reasons…”

Click on the Screenshot to View actual WIKI Page shown below:

FOR MORE INFO from WIKI on ‘CULTIVATION’, CLICK THE BUTTON BELOW:
Ornamental Cultivation

Not only are the SEEDS 100% Legal To Possess, Buy, Sell, and GROW in the USA,

But you can even Buy LIVING Papaver Somniferum PLANTS in the USA, if you look around at your Local Nursery or Grocery Store.

In fact, here’s a photo of one I purchased at my Local grocer (who also happens to be a Major Chain).

This wasn’t just a one-time thing either.

They sell them every year and have a variety of them. As do 3 other Nurseries in my area.

The only part that is rare about this Photo, is that they usually don’t label them as “Somniferum”. They usually call the “Breadseed” poppy, or “Paeoniflorum”

This last year, they were Selling Fresh Cut Somniferum Stems sitting in Water for $1.99 each 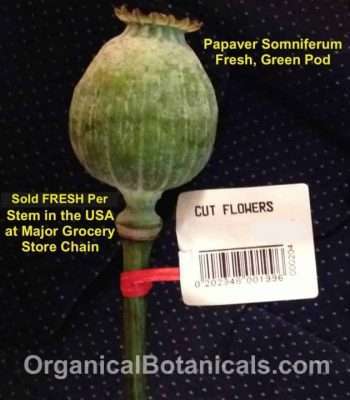 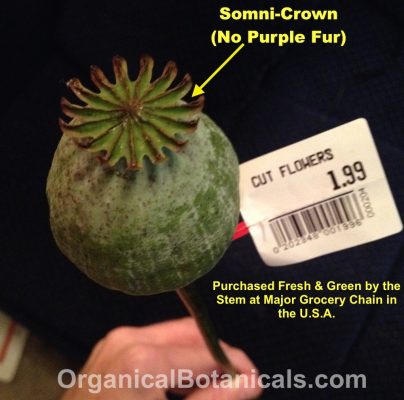 “..but, you thought it was illegal“

There are usually TWO Opposing  Opinions (below).

Pay close attention to the ‘Wording’.

It all has to do with the grower’s ‘Intent’.

Only ONE can be Right;

YES! Somniferum Poppies are 100% LEGAL to grow for their Seeds & Aesthetics

‘How to Grow Somniferum Poppies’ HERE

There is most definitely a ‘Grey Area’ of Confusion on this Matter – and it seems to be quite the Conversation on every Gardening Blog, Video Comment, or Forum I read these days.

As a Master Botanist with a PHD in Bio-Genetics, I concluded that there are THREE main Factors the Confusion stems from:

So, on ONE Side of the Spectrum:

The average Gardener who purchased a ‘Living Somniferum Plant Start‘ at their Local Nursery, would probably perform a Search on Google for something like: “Gardening Tips for Transplanting Somniferum Poppies’

Or perhaps, ‘What are Papaver somniferum Poppies‘?

..are much more likely to come across one of many Legitimate Sources (Shown ABOVE) such as the ‘Wikipedia‘ or  ‘WSU’s Vegetable Research & Extension Center’ Website.

“Cuz, the DEA says the Opium Poppy (and Poppy Straw) is a Schedule II Narcotic. So, since I have no clue what Schedule II is, & can only imagine what people snort through Poppy Straws, it must mean that it’s like, totally ILLEGAL…and stuff.” -‘Druggie Gardener‘

PEOPLE REALLY DO SAY THOSE THINGS! But the facts are this. A Schedule II Narcotic is NOT Illegal. It just means they need to be PRESCRIBED by a Licensed Physician. ONLY Schedule I Drugs are Illegal (such as LSD, PCP, Weed, etc). We do NOT Condone the use of anything illegal.

That’s right. MANY PEOPLE DIDN’T KNOW THAT YOU CAN ACTUALLY GET A PRESCRIPTION FOR OPIUM, METH, AND EVEN COCAINE! BUT HEY, THAT’S WHY I WRITE THIS, TO CLEAR THE CONFUSION.

For the REAL Facts, please Read: The DEA Fact Sheet on OPIUM

Or, you could see our TUTORIAL on ‘GROWING Opium POPPIES’ HERE

But, on the Opposite side of the Spectrum,

The reason for referring to the DEA’s Statements above, had to do with all that mumbo jumbo I spoke of in the Green Section about ‘Grower’s ‘Intent’. Remember all that? How “INTENT’ can usually influence how one goes about “Searching” for, and GATHERING, their Info?

A ‘Druggie’ Gardener who has illicit Intentions, will most likely look up Laws having to do with “Growing Opium”, only to end up at the DEA’s Website which states that “Opium Production’ & Processing ‘Poppy Straw’ is Illegal…bla bla bla”.

What the ‘Druggie’ fails to realize though, is that the DEA already Pre-defines the Intentions of the reader due to the very fact that their referring to the poppy in that regard. Because “Opium” and “Poppy Straw” are both terms used in reference to illicit use, or for manufacturing Drugs.

(many times, even Seed Packets are Labeled Alternative Florist Names such as ‘Bread Seed Poppy‘, ‘papaver paeoniflorum‘, there are also related Wild Strains such as ‘Papaver Setigerum’ but rarely seen at stores)

SO WHY ELSE DO PEOPLE GROW THEM? U Ask?
In my opinion, Somniferum Poppies, have some of the most Exotic blooms, Amazing Colors, and Beautiful Flowers of any kind I’ve Seen.

If you disagree, take a look at the FLICKR SLIDESHOWS (below) from some of our recent Grow Seasons- ALL Somniferum Poppies: